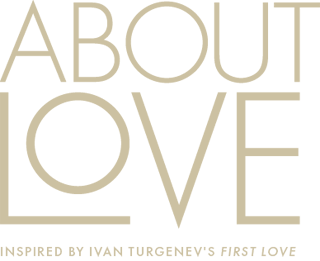 A young man expects to spend a quiet summer with his parents in the Russian countryside, but soon discovers those three months will be most consequential of his life, as he learns the difference between love and passion, and the ephemeral nature of life itself.

ABOUT LOVE is a new play with songs and music, based on the exquisite short story, “First Love,” by Ivan Turgenev.

Featuring a haunting  jazz score by Nancy Harrow and a versatile cast of six playing eighteen characters – all within a bold, theatrical staging by Will Pomerantz – ABOUT LOVE promises to be a unique theatrical event, and a fresh re-telling of one of Turgenev’s most memorable stories.

The Creators Discuss the Project:

Turgenev’s story is so human— each character is so true to life that it lives today even though it takes place 150 years ago.  That he captures the adolescent boy’s feelings completely is least surprising because it is his own youth he is describing, but he is equally perceptive about the heroine’s powers and her frailties and the father’s strengths and vulnerabilities.  The whole story is masterful in its compression— in such a brief time it covers every aspect of life from youth to death and we recognize it in our own experiences and are moved.  It is of its own time and place so accurately, yet it is universal and recognizable in 2020, a portrait of the essence of human relationships touching on a wide range of emotions— joy and sorrow, humor and humiliation, cruelty and empathy. Turgenev loved his characters.

Upon my collaborator, Nancy Harrow’s, recommendation, I read a short story called “First Love” by the Russian writer, Ivan Turgenev. I was immediately drawn to this heartfelt piece that would eventually become the basis for our new play with music and songs – ABOUT LOVE.

The story is full of Turgenev’s breathtaking craft, using carefully chosen details to weave a story full of complex characters and relationships.   The story felt so rich and personal when I read it, with an exquisite sense of what it means to be human and to be in love.   Turgenev’s humanity and his skill as a writer are unmatched, in my opinion.

I find that the story still resonates today because who among us has not fallen in love when they were just a bit too young and too open? Who has not allowed themselves to become vulnerable, experiencing this most joyful and most painful aspect of human experience?   Who has never had a ‘First Love?’ 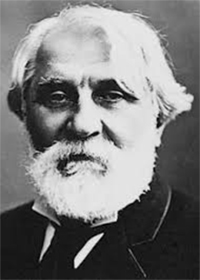 Ivan Turgenev was born October 28, 1818, in Russia, and died August 22, 1883, near Paris. A novelist, poet, and playwright whose major works include the short-story collection A Sportsman’s Sketches (1852), the novel Fathers and Sons (1862), and the play A Month in the Country (1855), his works offer realistic, affectionate portrayals of his characters as they attempt to move Russia into a new age. Turgenev poured into his writings not only a deep concern for the future of his native land, but also an integrity of craft that has ensured his place in Russian literature.

Turgenev spent many years in western Europe due to his personal and artistic stand as a liberal against reactionary tsarist rule. He returned home a confirmed believer in the need for Russia to follow a course of Westernization. During his period of self-exile from Russia, Turgenev became a sort of ambassador of Russian culture in Paris, and was friendly with the writers George Sand, Gustave Flaubert, the young Emile Zola and Henry James. In 1879 he was awarded an honorary degree by the University of Oxford.

Turgenev’s work is distinguished from that of his contemporaries by its sophistication, balance, lucidity and urbanity, with his greatest works celebrating the extreme preciousness and beauty of life. The elegance he brought to a love story, as well as the psychological acuity of his characters, were part of the power of this writer of great charm and wit. His reputation would eventually be overshadowed by those of Chekhov, Dostoyevsky and Tolstoy, but his unique qualities as a writer would insure his lasting place as the first “modern” writer of Russia.